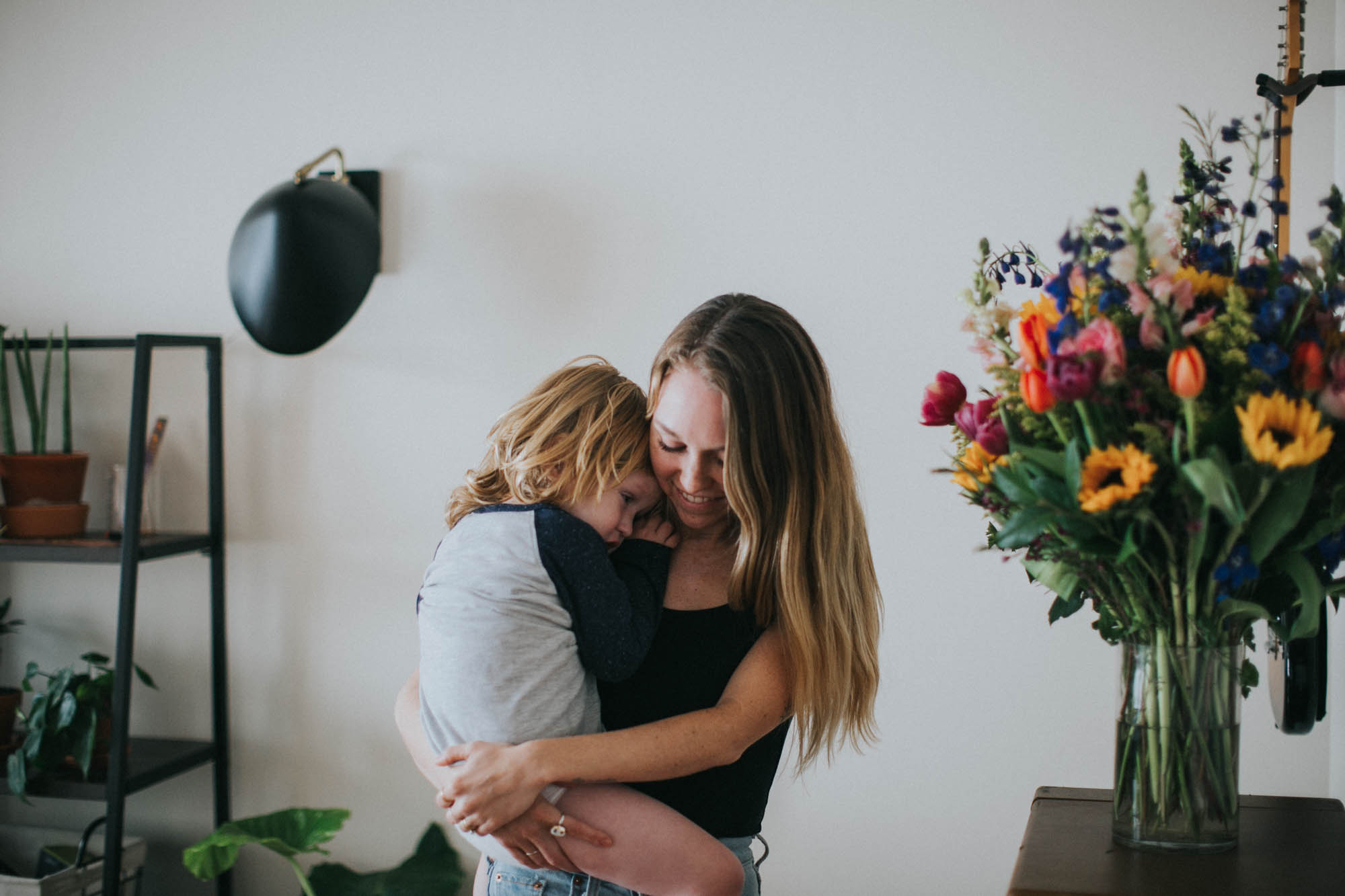 Our first interview is with Hailey Andresen, writer, podcaster, stylist, mother, wife, and the creative force behind Household Mag, where she chronicles her adventures in Brooklyn (and elsewhere!) Read on to learn about Hailey’s family, the inspiration behind her blog, and her unconventional decision to travel the world with a toddler in tow.

My husband Zack and I have one son, Owen. He’s two and a half. We moved to New York when I was pregnant and we’ve lived here for three years. We took eight months last year and traveled with our son, which was a really incredible experience, and now we’re just getting back to life here. My husband and I both work from home so we just try and spend as much quality time together as we can as a family.

Did you always know you wanted to be a mom?

I did. My parents were the first to have kids, so I was always the older mama-like character. I was the one who babysat all the younger kids, and I loved it. I definitely always knew.

When did you start Household Mag? Why?

I was working from home as a recruiter, and I started my blog as a creative outlet. My friend Amy offered to work with me on photos, so it kind of all came together. The whole point was to document my pregnancy and the early phases of motherhood, and within a year it just really took off. And it’s now my business. It’s really exciting.

On Household Mag, I try and share an honest approach to what’s happening in our lives. That’s why I think I’ve been able to connect with so many other mothers. Just really owning your story and being honest about it is so important when it comes to being a mom. Because no one’s alone in this, and it’s really hard oftentimes when things are portrayed in a different light than they actually are.

You also podcast. Tell us about that.

My husband and I have a podcast called Mom and Dad Made a Podcast. We started that just after our son’s first birthday. Once week, after Owen goes to sleep, we’ll crack open a bottle of wine, and we usually have a theme we’ll talk about. For example, a recent topic was gender roles in our relationship and how that plays into parenting and marriage. So it’s very relaxed, casual, but we make sure that the conversation at least heads in that direction.

And Amy and I have the Building Household Podcast with Hailey and Amy which we started just a couple months ago, talking about blogging and building a business. It’s been really fun.

Tell us about traveling the world with your family last year.

About this time last year, my husband was working for LinkedIn. He’d started a freelance writing business on the side and was trying to get that off the ground, but working the standard 40-hour work week, then coming home and working on that was really challenging. He wanted to be home with our son as much as possible, and he was seeing this traditional job not fitting into that.

So he proposed this idea to me: it would actually be more affordable if we sold everything we owned and left New York. We could do month-long stints in each place, and the AirBnbs we stayed in would be cheaper than our rent in New York. It would give us the flexibility to grow each of our businesses, and get that time together as a family. And oddly enough, it worked. [Laughs.]

How was it traveling with such a young child?

Kids are just so adaptable. I think my husband and I had a way harder time getting comfortable in each place than our son did. He’s co-slept since he was a little guy, so as long as he was sleeping with us and around us, it was easy for him to just adapt and go with the flow.

What was your favorite place to travel to?

We went to Paris, Berlin, Croatia, Iceland, and Montreal. I think our favorite place was Paris. It’s similar to New York in a lot of ways, and we’re such foodies, and that city’s just great for it. As far as being family-friendly, I think Berlin was much more family-oriented.

More so than New York?

No, see, that was the thing. For Paris and Berlin both, we were like, these are amazing cities, I can totally see us living here, but they’re not amazing enough that we want to live in a different country. I think that’s what led us back to New York.

And you’re in Brooklyn now. What made you choose city living over suburban living?

It took us a little while to get pregnant with my son. We were kind of getting to the point where we were like, I don’t know if this is going to happen for us. We needed to keep living our lives. We were in Phoenix at the time, which is obviously a city, but it’s nowhere near New York. We’ve always wanted to live in New York. So my husband was like, “I’m just going to start applying to jobs, and let’s see what happens.” And the day I found out I was pregnant is the day he got his interview.

It wasn’t necessarily our plan to start a family and then move across the country, but how can we deny our son the experience of growing up in New York City? With the opportunities he’s going to have, the culture he’s going to be surrounded by?  We just thought we had to at least try it. And now after being here for a few years, it just feels right. It feels like our home, even though it’s not where we went to high school or where our families are. We’ve made own little home here.

Do you have any favorite local activities?

We love walking around the city and exploring new neighborhoods. We love stopping and checking out different restaurants and whatnot. And it’s funny; none of that really sounds super kid-oriented, but Owen loves it just as much. He’s such a happy camper if he’s just in his stroller and we’re out and about. He asks every morning to go on a walk.

We’re just exploring what else there is to do with him. One of the reasons we wanted to end our travels is to come back and have more of a home base and find new activities for Owen, get him to the place where he’s starting to make friends, build up that sense of community.

How do you balance being a mom with being yourself?

To be totally honest, I feel like it’s something I’ve really struggled with. Just a few weeks ago, I signed up for a monthly yoga membership, which is something that was a big part of my life before I was pregnant. I’ve learned that if I give myself that time, even if it’s just an hour a day to get out of the house by myself and just be a person, I’m a better mom because of it. There was a lot of guilt initially associated with taking time for myself when we don’t have enough time to do everything we want to do already. But I’ve just learned that it comes full-circle: I’m a better wife and a better mom if I really implement that self-care.

Getting to experience things through Owen’s eyes has been such an incredible aspect of motherhood, like watching the wheels start to turn and things click when he learns a new word or a color or number. He’s been obsessed with toy firetrucks and this past weekend, there were these huge firetrucks at Central Park, and him seeing them and being like “Oh my God!”—it just warms my heart to see him growing up in those ways.